Fire service to the residents of NRH actually entails the history of two departments: the Smithfield Volunteer Fire Department and the NRH Fire Department. During the mid-1940’s fire service to the residents of Smithfield was changed by the war effort which took many of the town’s men. B.C. Redding, the town’s fire chief and local grocer, recognized the need to continue the response to fire in the area. The biggest threat of fire at that time was grass fires. Chief Redding, upon hearing of a grass fire in the area would drive around town and pick up the women of the town and with the use of burlap sacks and water carried in the back of the chief’s station wagon, they would extinguish the fire. For structure fires the City of Smithfield and the undeveloped NRH area would rely on the cities of Richland Hills, Haltom City, and Tarrant County for fire protection. In 1948 the Smithfield Volunteer Fire Department built a fire station across from the town’s barber, Mr. Cobb. This single bay fire station was built from cinder blocks recycled from the Smithfield Elementary School gym, which was destroyed by a tornado. Additional bays were added for a total of three bays, two vehicles deep.

When the City of North Richland Hills incorporated in 1953, it relied on volunteer firefighters as well as surrounding cities fire departments. In 1958 the annexation of the town of Smithfield created the issue of ownership of the fire equipment. This became a heated debate due to the fact that the Smithfield volunteers personally owned the equipment and were not appreciative of having their fire vehicles just “assumed” in the annexation. As a show of their ownership privileges, all of the Smithfield fire vehicles were parked at a local site near Amundson and Main Street. This action caused the City of NRH to purchase, at a total cost of $2,500.00, eleven fire response vehicles. Many of these vehicles were “converted” meaning that they had been designed for some purpose other than firefighting, but were trucks nonetheless. 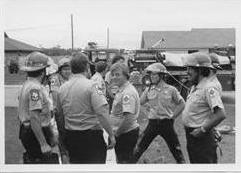 In November 1969, the city hired the fourth paid firefighter and began providing 24-hour fire protection to the citizens. A firefighter worked 24 hours and was off for 48 hours. This shift schedule continues today.

In 1973, then City Manager Gene Riddle promoted Ted Castleberry to Fire Chief.  Castleberry, a former firefighter and patrol officer, served as Fire Chief until 1975 when Stan Gertz was appointed to lead the department.  In 1977, the city took over providing emergency medical services to the residents which continues today.  Chief Gertz saw the department grow to 70 plus paid members, with four fire stations housing four engines, two ambulances and a ladder.  He was Fire Chief for over 27 years.

In January of 1998, Andrew Jones took over as Fire Chief. Chief Jones saw a third ambulance added, two fire stations relocated as a result of growth on the north end of the city, and increased staffing in the fire prevention division. These accomplishments reduced the City's Property Protection Classification from a 4 to a 2. Chief Jones retired in May of 2012.

In 2013, with Stan Tinney as the Fire Chief, NRH Fire Rescue employs 90 motivated and capable firefighters and civilian employees. The North Richland Hills Fire Rescue Department remains vigilant to ensure the Fire, Rescue, Fire Prevention and Education, and Emergency Preparedness needs of the community are met in an efficient and effective manner.