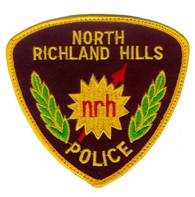 After the incorporation of North Richland Hills in 1953, Robert Hays was appointed town marshal. In addition to Mr. Hays, J.M. Shelton was licensed by the city as a night watchman to provide protection during hours of darkness.  Each family was assessed a small monthly fee to pay for this service.

In July 1956, Mayor Donald F. Denney and the council approved and installed an Auxiliary Police Force. The force was all volunteers appointed to assist the town marshal. In June 1959, Walter Smith was also given a license to operate a night patrol in North Richland Hills. During this period, talk of a paid police force was growing.

In July 1960, the council hired George Braxton Coe of Virginia as the first police chief. A property tax was passed to pay for the chief and five officers as well as establishing a city court. Chief Coe organized the newly formed department and designed the first police uniforms.

In 1974, the North Richland Hills Police Department was exposed to what was the beginning of perhaps the most revolutionary concept in the police profession. A computer was delivered to the dispatch office.