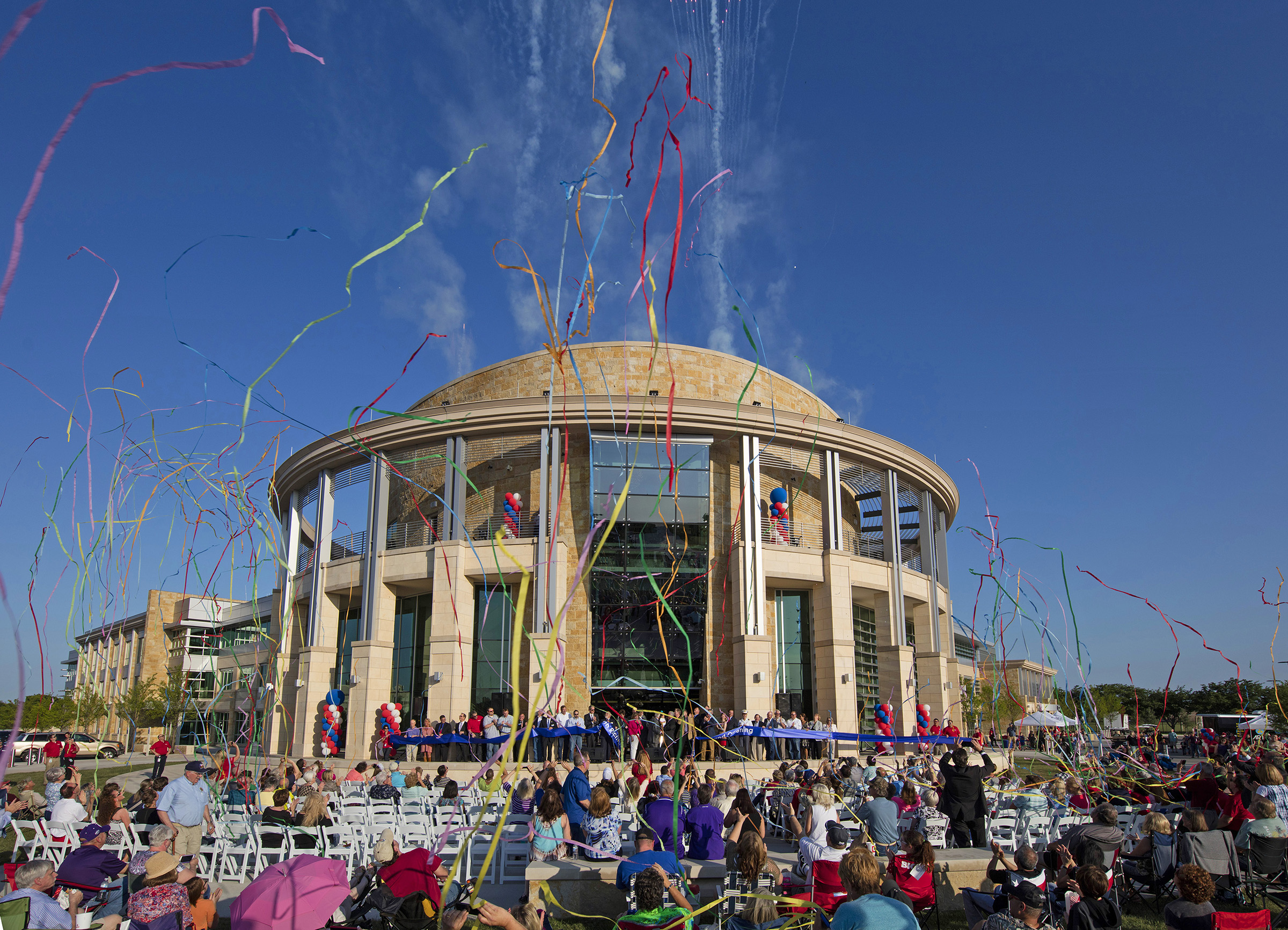 Watch the video of the grand opening ceremony held on May 13, 2016.

March 2016 Update: Municipal Court opened on March 23 and City Hall opened on March 29. The Public Safety portion of the building opens on April 7. The Jail will be the final service to relocate to the new facility at a later date.

February 2016 Update: City departments will begin relocating to the new City Hall at 4301 City Point Drive in March. The relocation will be phased in over several weeks with the facility expected to be fully open for business by the end of March.


December 2015 Update: Contractors continue to work 7 days a week to finish out the interior of the building. Paving and landscaping of the plaza in front of the building are also underway. With 43 bad weather days during construction so far, anticipated move in is now Spring 2016.

The construction budget has been adjusted to $60,115,156.20 to cover several modifications made to the project. Funding for this change order is covered by other project savings, a reduction in contractor fees and a grant.

Fall 2015 Update: The iconic bowstring glass element on the center of the building facing onto the plaza, as well as the drum stone halo, are nearing completion offering for the first time the imagery of the finished product that to date had just been artistic renderings. Installation of television cabling, internet, fiber and copper connectivity is underway and technology servers are being installed. Outside the building landscaping, hardscaping, and fencing work have begun. Contractors continue working seven days a week to make up for delays due to rainy weather.

The construction budget for the City Hall project has been adjusted to $59,882,706.20 to cover the cost of additional work needed that had not been anticipated. Funding to cover this increase came from the design team and the owner’s contingency.

Summer 2015 Update: One third of the building is fully enclosed and air conditioned and has most painting, wall covering, flooring, and ceilings complete. The second and third sections are only slightly behind the first and have had a tremendous amount of work completed this summer. There are over 250 workers on site each day, working hard to make sure the project remains on schedule. Anticipated move in is early 2016.

Winter 2015 Update: The final structural pieces of the new building will be hoisted into place in January. The completion of this major phase of construction will be recognized on Friday, January 23 at 1:30 p.m. with a brief Topping Out” event at the construction site. Masonry work is beginning. Duct work is being installed and interior wall partitions are being framed.


Fall 2014 Update: Structural work and framing is ongoing. Preparations are also being made to pave parking areas.

Summer 2014 Update: Infrastructure and utility work is nearing completion and contractors have begun working on the building's foundation. Drilled piers are being installed and structural concrete is being poured with excavation and forming of grade beams, elevator pits, and concrete columns. In addition, underground plumbing and electrical work within the building footprint is ongoing.

Value Engineering: Bids from various construction trades for the new building were received in March 2014 and came in at $61,649,020, which was 8.5% higher than the approved construction budget. This was primarily due to higher than anticipated inflationary cost increases for areas such as concrete, electrical and security electronics, as well as revisions to the project specification that were made after the initial budget was set. For example, a more energy efficient HVAC system was selected, which will cost more up front, but will provide long-term energy and cost savings on monthly utility bills.

Following the opening of the bids, city staff worked with contractors, architects and the Municipal Complex Oversight Committee to value engineer the project and make $2.4 million in reductions, bringing costs down to $59,202,481. On July 28, 2014 the City Council approved an amendment to the contract with Balfour Beatty Construction and adjusted the construction budget for the new building to $59,202,481.

Cost reductions are being made in furnishings, technology, landscaping and other areas of the project to cover most of the construction cost increase. $729,337 will also be transferred from the Gas Reserve Fund, Special Investigations and Interest Income.

Barring any weather delays, substantial completion of the building is expected in November 2015.

City Point Zoning Approved: On October 14, 2013, the City Council also approved a zoning plan for the new City Point development. The new zoning will allow the property around the new City Hall to be redeveloped with a mix of uses including retail, restaurant, office, hospitality, entertainment, and multi-family residential. View Zoning Plan

Groundbreaking: A ceremonial groundbreaking for the new NRH City Hall was held on April 5, 2013. Construction of utility lines and other infrastructure will take place over the next several months with construction of the new building to commence in early 2014.

Street & Plaza Naming: In March 2013 the City Council selected City Point Drive as the name for the new entrance road to the facility and City Point Plaza as the name for the public plaza space. The new entrance road will be constructed off of Boulevard 26, tying into the current Road to the Mall on the west and Cagle Drive on the east making one continuous road named City Point Drive. City Point Plaza, a one-acre public plaza, will be located in front of City Hall. It will be used for public events, and holiday gatherings and will support the proposed commercial activity planned adjacent to City Hall.

Contractor Hired: In Fall 2012, the City Council approved a contract with Balfour Beatty Construction for the new City Hall. Balfour Beatty Construction is headquartered in Dallas and has an office in Fort Worth that will be directing this project. The company has extensive experience on building government facilities including buildings for the cities of Fort Worth, Dallas, and Houston, as well as Ellis County and Hays County.

Architect Hired: In Summer 2012, the City Council approved a contract with Brinkley Sargent Architects for engineering, design and construction administration services for the new City Hall. The architectural design process is expected to take 12 to 16 months to complete.

Oversight Committee Formed: In Summer 2012, the City Council appointed a Municipal Complex Oversight Committee. This committee will help oversee the construction of the new facility in order to ensure that the completed project is consistent with the intent of the voters who approved it. The committee is made up of three council members and four citizens including: Councilman Scott Turnage, Councilman Tom Lombard, Councilman Tim Welch, Steve Koons, Janet Golightly, Whitney Harding and Jay Bruner. The committee meets on an as needed basis.
Contact Us
Code of
Ordinances
Job
Opportunities
Online
Payments
Report
a Concern
Stay Notified
[]